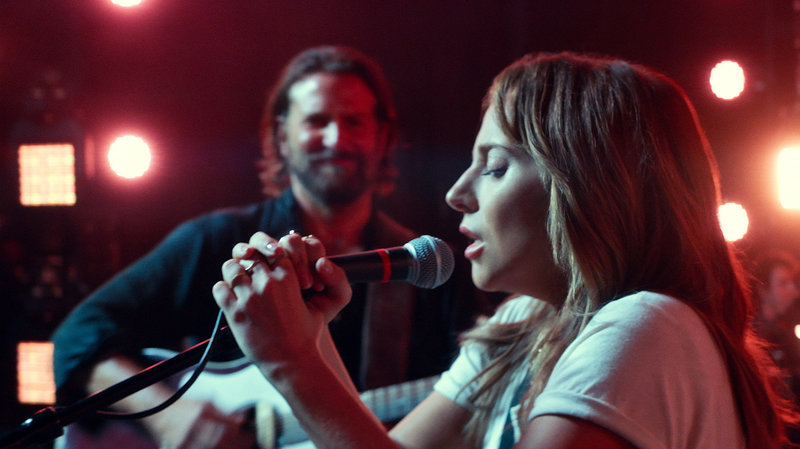 The new romance drama “A Star is Born” starring Lady Gaga (Ally) and Bradley Cooper (Jackson Maine) is the third remake of a classic film originally made in 1937, starring Janet Gaynor and Fredric March. The first remake was made in 1954 and starred Judy Garland and James Mason. The second remake was made in 1976 starring Barbra Streisand and Kris Kristofferson.

With each new film version, there are little differences such as locations, names, and supporting character details to establish a fresh contemporary scenario.  In this year’s version, supporting characters such as Bobby (Sam Elliott), Jack’s brother and tour manager, and Lorenzo (Andrew Dice Clay), Ally’s father, represent grounding influences in each star’s life.  Additionally, the parts are cast well and make this film even more interesting.

Bradley Cooper, who is the director, producer, songwriter, writer and star of the latest remake, takes a hard approach to the disease of alcoholism by including family abuse, tinnitus, and suicidal tendencies. The screenplay is written by Eric Roth, Bradley Cooper and Will Fetters, based on an original story by Robert Carson and William A. Wellman (1937), and screenplays by Moss Hart (1954), and Frank Pierson, Joan Didion, John Gregory Dunne (1976).

Lady Gaga, the songwriter in the starring role, performs with Cooper and the chemistry between them is very intense on-screen as well during their singing duets.  The songs sung by Gaga and Cooper were written by Gaga, Cooper, and feature music by Lukas Nelson and DJ White Shadow, with additional involvement by Jason Isabella, Mark Ronson, Diane Warren and Andrew Wyatt. Interscope Records released the soundtrack which includes hits such as  “Black Eyes” by Cooper and Nelson, and “Shallow” by Gaga, Ronson, Anthony Rossomando and Rice which have hit the top of the Billboard and other music charts.

The story is a tear jerker, and it is a must see by everyone because it shows the nitty-gritty side of the music world, such as the difficulties faced when drugs and alcohol undermine great careers in the industry.  Also, there are many real moments that show how some, not all, managers and producers deal with getting their clients to focus, work, commit and get to the top of the charts. Rez Gavron (Ravi Gavron) is Ally’s driven, divisive, manager/ producer that literally cuts throat to break Ally into the music industry after poaching her off stage when he sees Jack raise Ally up on the stage as a singer during his concerts.  Jack is aging, drinking and basically dropping in popularity because of his issues. Eventually, as Ally’s career climbs Jack’s initial enthusiasm is washed away by drunken episodes that become awful to bear.

Please take the time to see this movie, and do not forget to bring your tissues!