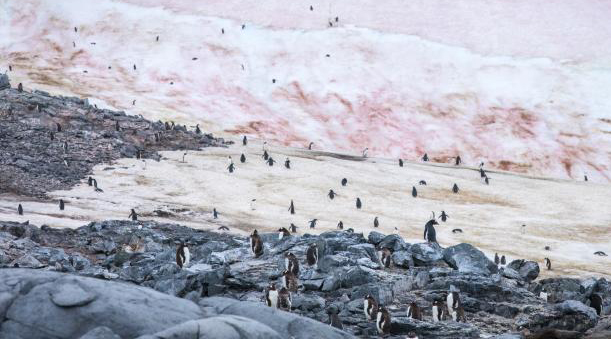 National Geographic reports that thriving communities of algae are transforming the world’s ice sheets to a red-pink color, leading to an increase in the melting.

The pinkish ice has cropped up in Greenland, home to one of the world’s largest frozen bodies of water. It has also been spotted in other parts of the Arctic as well as Alpine and Himalayan glaciers and Antarctica, according to the report.

“In order for the algae to form visible blooms and increase the melting of the snow and ice, they just need the right conditions, which at a minimum involve basic nutrients and melting,” says Alexandre Anesio, a biogeochemist from the University of Bristol. “As the climate gets warmer, the availability of liquid water from snow and ice becomes higher, favoring the growth of snow and ice algae.”

The result is known as  “The Algal Bloom Effect.” Its occurrence has sparked the research project “Black and Bloom,” a 5-year research project to determine how and why the algae are influencing the ice melting in Greenland.

Martyn Tranter, a polar biogeochemist from the University of Bristol in the U.K., is the leader of this significant research endeavor and firmly believes that the algae represent a crucial component in this environmental crisis. “These ice algae are photosynthetic organisms that produce biological sunscreen molecules to protect them from the sun, which in the Arctic in summer stays above the horizon up to 24 hours a day,” says Tranter. This contributes to the blackening of the ice.

Due to the progressions in the darkening of the surface, the ice loses its albedo — that is, its ability to reflect the sunlight back into space, which means more light absorption and melting. According to the National Geographic article, the algal blooms are causing the ice to melt 13 percent more every season.

Unfortunately, these blooms have not yet been internationally recognized as contributing to the melting. This leads scientists to fear that if they continue, they could impact the coastal areas of New York, Shanghai, Miami, Bangladesh, and Indonesia.

Although scientists have not come up with a solution to this strange phenomenon, that can change. If the UN Intergovernmental Panel on Climate Change recognizes this issue, then more funding and research can be dedicated to the “Black and Bloom” project to stop this environmental crisis.