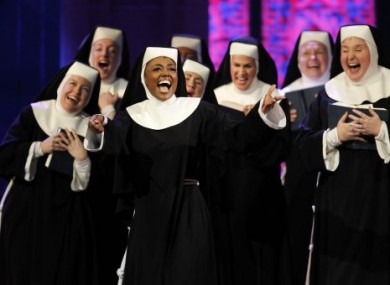 First off, be sure to check out “Sister Act The Musical” which opens this week! The Genesians’ Spring production at Immaculate Heart High School stars senior Savannah Smith as “Lady Fabulous” — also known as Deloris Van Cartier / Sister Mary Clarence!

However, if you have the time, I also recommend viewing the feature film “Sister Act” starring Whoopi Goldberg so you can see the differences between the film and the Immaculate Heart musical.

“Sister Act,” the film, was released in 1992 and was written by Paul Rudnick, produced by Teri Schwartz, and directed by Emile Ardolino, with music producer and score by Marc Shaiman, and executive produced by Scott Rudin.  There was a sequel, “Sister Act 2 – Back in The Habit,” in 1993 written by Paul Rudnick (based on characters created by), James Or, Jim Cruikshank and Judi Ann Mason, produced by Scott Rudin and Dawn Steel, directed by Bill Duke, music by Miles Goodman, and executive produced by Mario Iscovich and Laurence Mark.

The first stage production of “Sister Act – A Divine Musical Comedy” was in 2006 in Pasadena, California, and there have been Broadway as well as international productions over the years. It features music by Alan Menken, lyrics by Glenn Slater, book by Bill and Cheri Steinkellner, and additional book material by Douglas Carter Beane.

The film and musical are different in some specific ways.  Initially, the film is set in actual locations in Reno, Nevada, in the 1990s.  The play is set in Philadelphia and the time period is the late 70s and it is performed on a theater stage.

In the film, the nuns who Deloris is secretly hiding with in the convent are involved with community activities and have several scenes with Deloris in her room, in the kitchen, the choir practice room, the hallways, the offices, and the church.  In the musical the nuns Mother Superior (played by Fiona Riley ’19), Sister Mary Robert (played by Cassidy O’Connell ’18), Sister Mary Patrick (played by Olivia Fries-Farr ’19), and Sister Mary Lazarus (played by Taleen Angoorly ’18), have most of their scenes in the church.

Another difference is the opening scene.  In the film, Deloris is singing in a nightclub / casino where she works and is run by her boyfriend Vince LaRocca.  In the musical Deloris and her backup singers are auditioning for Curtis Jackson (played by CJ Hightower ’18) with hopes of performing in the nightclub.

There are several more differences, as well. Without spoiling the musical, the relationship between the police officer Eddie Souther (played by Khafira Freeman ’20) and Deloris clearly builds. They are definitely connecting through past high school memories and their present feelings show they are getting closer.  In the film, Lieutenant Eddie Souther helps Deloris hide from Vince LaRocca, and how we learn of Eddie’s interest in Deloris is somewhat more subtle.

“Sister Act The Musical” opens Thursday at 7:30 p.m. in the IHHS auditorium, with additional 7:30 p.m. performances Friday and Saturday and a 2 p.m. matinee on Sunday. Tickets are $12.

0 comments on “Sister Act Musical and Film — What’s the Difference?”