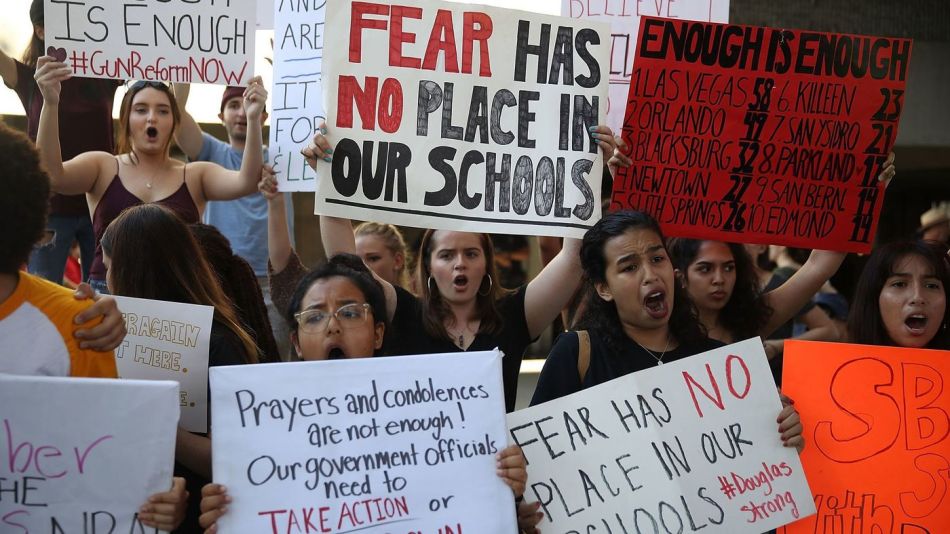 In the wake of the devastating shooting at Marjory Douglas High School in Parkland, Florida, there are renewed calls for stricter gun control measures. But this time, the loudest voices are high school students, and they’ve made it clear that they won’t be silenced.

A new CNN poll taken after the shooting revealed a 70 percent support for gun control, up from just 52 percent last October. While this is a positive change, it is apparent that popular public support is not the only factor that affects potential gun reform. To understand why, we look to the National Rifle Association (NRA) — one of America’s most potent political influencers.

At a recent CNN town hall, Cameron Kasky, a survivor of the Parkland shooting, asked Republican Senator Marco Rubio if he would continue accepting donations from the NRA, a question which Rubio vaguely answered, “People buy into my agenda.” Rubio is one of the many politicians and lawmakers in our country who take and accept money from the NRA. This points to a broader issue in American politics: the corruption of lobbying and big donors, as well as the skewed priorities of those we elect into office.

On its website, the NRA claims to be one of “America’s longest-standing civil rights organizations.” The Second Amendment, in addition to the United States’s history as a rebellious colony, is the major reason why gun-rights are so popular in this country. Without private guns, it is likely that we wouldn’t have won the Revolutionary War. The right to own guns is seen as our fundamental right as Americans, as well as a vital part to our democracy.

But what does the Second Amendment actually say? Like much of the U.S. Constitution, it is vague. It states that “A well regulated Militia, being necessary to the security of a free State, the right of the people to keep and bear Arms, shall not be infringed.” Despite the problems it produces, the Second Amendment’s vagueness is a good thing, as it gives the Constitution enough adaptability to apply to modern times. There is no way the Founding Fathers could have suspected that semi-automatic assault rifles would be available at your local Walmart.

But still, many accuse gun regulation as being unconstitutional, drawing comparisons to our right to freedom of speech. However, because freedom of speech is not absolute, with obscenity and incitement of violence exceptions to protect society, why should gun rights be absolute? On the other hand, gun-control advocates point to the phrase “well-regulated Militia” as direct approval for regulation. Either way, it is clear that gun-control in and of itself is not technically unconstitutional. However, our constitution also guarantees us the right to life, liberty and the pursuit of happiness, and one could argue that the victims of the Parkland shootings had their right to life violated.

With the constitutionality question out of the way, we are faced with another question: What’s best for society?

It can be difficult to discuss current gun laws because most operate at the state level. One aspect of regulation that the federal government does have some control over is background checks.  The FBI conducts background checks on all gun-buyers. But, the lack of emphasis on gun control within the government means this system is inadequate. If the FBI cannot complete the background check in a specific amount of time, the buyer is allowed to purchase without a background check. This is how Charleston shooter Dylann Roof purchased a gun, although legally he shouldn’t have been able to do so.

We can see a trend: After mass shootings there are renewed calls for gun control, and new laws are proposed, but they always fail. Notably after the Sandy Hook shooting massacre, Senator Dianne Feinstein of California proposed an assault rifle ban, though unsurprisingly such a radical change met much opposition. After the recent shooting, the emphasis has been on bump stocks, which give semi-automatic rifles almost the power of a fully-automatic gun. After the shooting in Las Vegas, a bipartisan effort led by Feinstein and Republican Senator Carlos Curbelo attempted to ban bump stocks. Although the measure received bipartisan support, intense opposition by the NRA killed the proposal.

The uncompromising criticism directed towards the government has already had an effect. Many public officials who have an anti-gun control record are reconsidering their stance. Perhaps, the most shocking news has been that the Trump administration is drafting an executive order to ban bump stocks. While this is a positive revelation, without bump stocks these are still semi-automatic guns. These guns were not made for the self-defense of common people. They were made for war. They were made for killing in mass.

In 1996, Australia’s conservative government banned semi-automatic guns after a shooter killed 35 people. There hasn’t been a mass shooting in Australia since. The Parkland shooting should, and needs to, be the last mass shooting in the United States.

The issue of mass shootings is particularly disturbing, not only because they claim so many innocent lives, but because they result in the devaluing of human life. Elected officials are supposed to act to protect the people they represent, but time and time again, they have failed us.  After every mass shooting, we think “this is the one” that will finally convince politicians and the American public of the importance of reform. Even after Sandy Hook, which claimed the lives of many innocent school children, any attempted reform was blocked. This is heinous. We can’t wait for another mass shooting to happen and hope it will be “the one.”

Although this might make the future look grim, there is some hope. The youth of this country want change, and they are unrelenting. These are the future leaders of our country, and they have already provoked a major transition in the gun control discussion.

photo from the LA Times