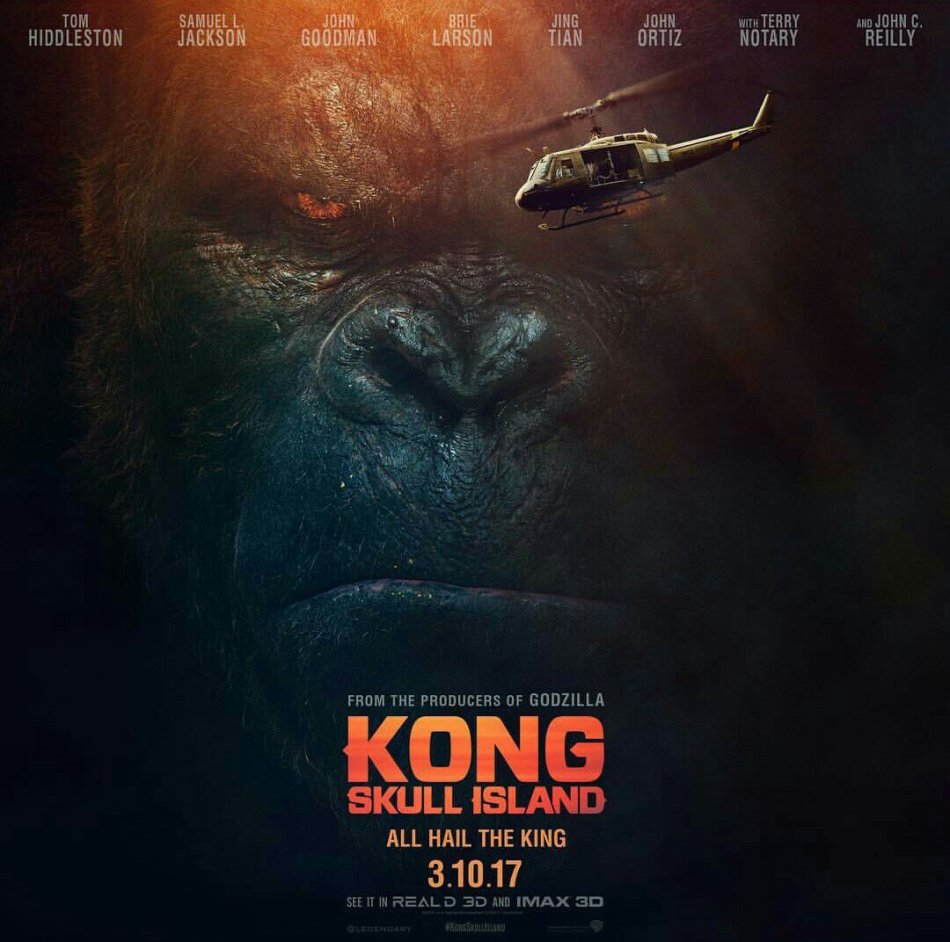 “Kong: Skull Island” is an action adventure, sci-fi film with a lot going on — and that may be its downfall for some viewers.

The film is directed by Jordan Vogt-Roberts, with the screenplay written by Max Borenstein, Derek Connolly, Dan Gilroy, and story by John Gatins.  There are a lot of stars in this film. I believe that the reason the film has so many characters is because there are three storylines moving through the main story. Also, there is an interesting story about the studio collaboration, which is probably why there are so many people involved in this production. Universal let Legendary Pictures make Kong Skull Island with Warner Brothers because of future deals and rights involving a Kong – Godzilla mash-up.

The actors and their characters are Tom Hiddleston as James Conrad, Samuel L. Jackson as Preston Packard, Brie Larson as Mason Weaver, John C. Reilly as Hank Marlow, John Goodman as Bill Randa, Corey Hawkins as Houston Brooks, John Ortiz as Victor Nieves, Tian Jing as San,  and the list of co-stars in supporting character roles continues. The producer list is as long as the cast list practically.  The film is produced by Thomas Tull, Mary Parent, John Jashni, Alex Garcia, and Executive produced by Eric McLeod, and Edward Cheng.

The story is about Bill Randa an aging government agent from the United States and Houston Brooks a seismologist who want funding to explore an island just as the Vietnam War is ending.  They receive funding and get military transport lead by Lieutenant Colonel Preston Packard and tracker James Conrad. Mason Weaver is a peace activist and photographer who takes pictures throughout the action-packed experience. The exploration comes together and moves fast as a huge ship carrying war freight stops at the edge of the stormy barrier between the exploration team and Skull Island.  From this point forward the film is gory, bloody, gruesome, and has so many different twists and turns as well as perspectives because of the different areas of study that each group represents.

Kong the gorilla is fantastic.  The action and special effects of all the animals and environment are what make this film worth watching.  It is, however, a typical popcorn move.  I enjoyed the locations, the backdrop and soundtrack.  Mostly the soundtrack because it helped make the film easier to sit through.  The war, military, fighting, killing, and splattering blood were pretty gruesome.  Trying to follow the three substories made the experience of watching the film and following the story at the same time distracting.  One group wanted to kill Kong, another group wanted to save Kong, and yet another group saw Kong as a King and protector.

I also liked the set decoration and art direction. It gave this film a great look and feel for the time period, the 1970s.

Captain James Conrad: I guess no man comes home from war, not really.

Houston Brooks:  I thought you were crazy.

Bill Randa: I wish I was.

Hank Marlow: Sometimes there’s no enemy until you look for one.