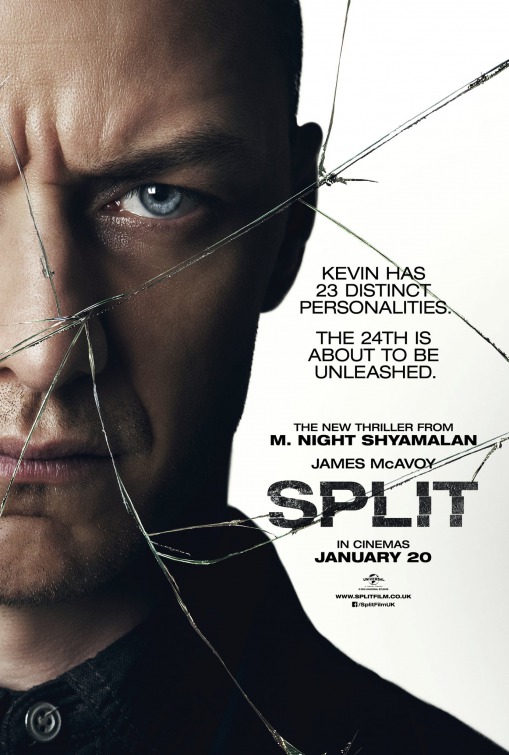 The movie Split, which opened in theaters January 17, is a psychological thriller from Universal Pictures and produced, written and directed by M. Night Shyamalan. The main cast includes James McAvoy who is the split, multiple-personality lead of the film, Anya Taylor-Joy as Casey Cook, Betty Buckley as Dr. Karen Fletcher, Haley Lu Richardson as Clair Benoit, Jessica Sula as Marcia, Izzie Coffey as young Casey, Brad William Henke as Uncle John, and Sebastian Arcelus as Casey’s Father. This low budget film is being touted as M. Night Shyamalan’s come back film since his first hit The Sixth Sense, starring Bruce Willis, played in theatres in 1999.

In the film, the lead has many names and personalities to match. I think it makes the film a little confusing to follow, however, that is part of how the film evolves into a great psychological thriller. Keeping track of the personalities and the reason they each exist or are allowed into the light forms the story and conclusion that emerges at the end. There is a twist ending that I will not reveal, meaning that everyone has to see the movie — no matter how disturbing it may be to the psyche.

In my opinion, this film, as a whole, delivers an interesting message; you need to know who you are dealing with because they just might be someone else. Split definitely makes you think long and hard and every now and then causes you to cautiously look over your shoulder.

Dr. Fletcher:  “I’ve never seen a case like this before.  Twenty-three identities live in Kevin’s body.”

Kevin as Hedwig: “You trying to trick me? Etcetera. I’ll tell on you.”

Kevin as The Beast: “The broken are more evolved.”

0 comments on “No “Split” Decision for This Thriller”