“La La Land” recently received a record-tying 14 Academy Award nominations, including for best picture, director, actor and actress. Here’s a closer look at this film that’s drawn so much attention and honors.

Synopsis: “La La Land” is set in Los Angeles during present day. It tells the tale of struggling actress Mia, played by Emma Stone, who is desperately trying to fulfill her 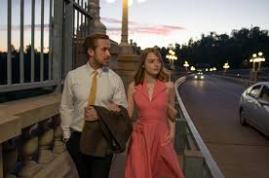 dreams of going on to star in a big Hollywood film. While driving on the 101 one day, she encounters jazz pianist Sebastian, played by Ryan Gosling, whose dream is to own his own jazz club and keep the spirit of jazz alive. Throughout the course of the movie they are drawn together by their common desire to do what they love. However, as their success pursuing their dreams begins to become a reality, they face decisions that stand in the way of their romance. Eventually the dreams they work so hard to accomplish threaten to rip them apart.

Review: Damien Chazelle’s vivid and colorful musical gave me the nostalgic feel of classic musicals from the 1940s and 1950s. The movie, an homage to old Hollywood, was shot in Cinemascope, a format more prominently seen in films from that era. Chazelle and Linus Sandgren, the cinematographer, choose to shoot in this style because normal digital cameras capture reality so well, it is difficult to make the scene look “magical.” Additionally, the film captured every detail perfectly; whether it was the choreography, costume design, or songs, all aspects of the movie were amazing. I especially enjoyed the beautiful score and the original songs!

As an Angelino, being able to recognize all of the places in the movie where they filmed was a plus. The film showcased the Griffith Observatory, the mural on the wall of the storage facility under the 101 near Immaculate Heart, and locations in Hollywood, Downtown Los Angeles, and much more.

Not a big fan of musicals? Give it a try and you’ll be amazed at how greatly conducted this film is. I highly recommend watching it!