By Lauren Berger ’18
1. What is the greatest feminist issue women face today (e.g. body image, wage gap, violence/assault on women, planned parenthood, etc.)
2. What are your thoughts on the Women’s March? Did you or someone you know participate in it?
3. What do you think people can do to foster a feminist/ egalitarian environment? 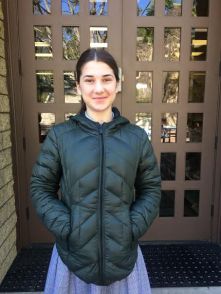 Hera Ballard ’19:
“I think planned parenthood [is the greatest feminist issue] because despite how it’s grown, [I’m worried] that the president we just elected will try to get rid of it. I think every single women has a right to choose whether or not want a child and should have access to birth control and contraceptives.
I personally did not go [to the Women’s March] but my friends went. I agree with what they have to say. Women have a right to stand up for what they want and what they believe in. I think it is amazing that so many people came out and actually stood up for what’s right.
[To foster an egalitarian environment] I think people have to treat everyone equally and with respect. I think that that’s the way [to teach] future generations.”
Juliann Freedman ’18:
“I think all [feminist issues] are intersectional. The Women’s March especially brought up

a lot of issues of intersectionality and just how much is involved with feminism; if you’re a feminist, what else do you have to care about? I think that that’s a huge problem because people forget that there is so much more activism [involved in] feminism and that the feminist movement has always [been involved] in other social justice issues. For example, the wage gap. People say women only make 70 cents to a man’s dollar, but they’re forgetting that women of color make even less. There’s also a lot of misrepresentation and misinformation in clickbait headlines and if you add the word ‘feminist’ to it, it seems [deceptively representative] of a whole movement that’s very diverse.
I participated in the Women’s March with my sister and my friends.
[To foster an egalitarian environment] I think people need to take action instead of saying things [about feminist issues] online, by themselves. I think that’s a big step to actually want to take an action if you care about something. Maybe volunteer or host a fundraiser if you care about an event. If you want to create a space to talk about feminist/ LGBT issues, host an event and find other people with different [perspectives]. Education and listening [are] huge things. Once you foster these communities and do social justice work (protest, educate, lobby), once you do an action instead instead of tweeting, that’s actually making real change.”
Tasja Drahveen ’17:
“I feel like the greatest [feminist] issue is really subtle: sexism. I feel like that is something that is really difficult to eliminate [because] women are considered weak. Even things that seem positive, (‘ladies first, help the lady, save the women and children’) 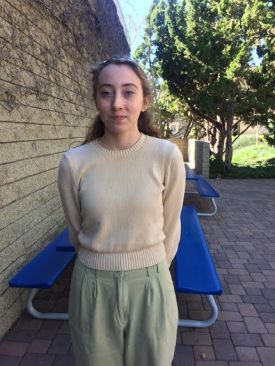 represent a bad image of women [as the weaker sex].
I was sadly not able to participate in the Women’s March. I liked the idea of it but I don’t think everyone [went about] it in the right way. It was [centered] on anatomical women. There wasn’t a lot of representation for women who were not born physically as a woman. Not everyone who identifies as a woman has ovaries – your [sexual anatomy] doesn’t define your that.
[To foster an egalitarian environment] I think that people need to know that just because it is called feminism, it’s not just about women. [Feminism] is just about equality, about everyone.”

0 comments on “Faces of IH: Feminism”