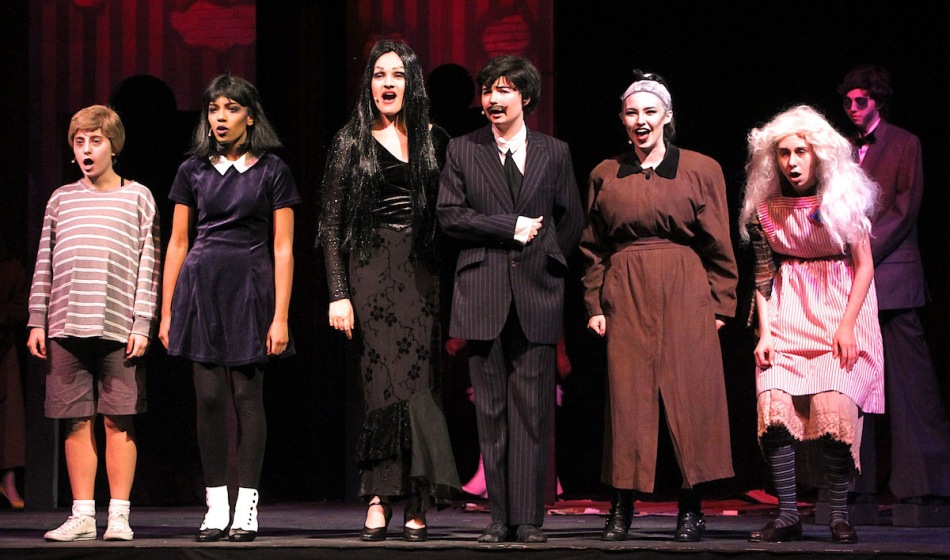 The “Addams Family Musical” was, in my opinion, the best high school’s best musical production during my time at Immaculate Heart. The show, which ran from Thursday, November 10 to Sunday, November 13, consistently delighted audiences with its humorous and spirited portrayal of the Addams family.

I had my trepidations about the musical. I enjoyed the Addams Family television show and subsequent movie adaptations, but I was co

concerned about how the new musical dimension would affect the Addams family’s gloriously macabre legacy. Given the cultural fame of the Addams family, I feared that the musical would be unable

to match its predecessors’ excellence while providing a fresh portrayal of the family. Despite its common plot line of young love and opposing in-laws, the Immaculate Heart production was successful because of its outstanding cast and crew as well as its surprisingly poignant moments.

The premise of the musical is that Wednesday Addams, Gomez and Morticia Addams’ crossbow-wielding daughter, is secretly engaged to Lucas Beineke, 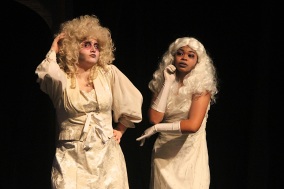 a young man from Ohio. The unspeakable horror of this secret engagement is privy only to Aunt Festra and Gomez Addams, who has never kept a secret from his wife. In the musical number “One Normal Night,” Wednesday begs her family to “act normal” when Lucas and his parents, Mal and Alice Beineke, visit. The musical deals with these two drastically different families coming to terms with their children’s’ love for one another.

The incorporation of the Addams family transforms this commonplace plot into a fascinating and unique story. Similarly, the entire cast’s strong vocal performances enlivened the performance.

Cassidy O’Connell was a shining star as Gomez Addams, the fearless and humorous Addams patriarch with an ambiguous Latin flair. She enchanted the audience with her excellent acting, amazing voice, and delightful sense of humor.

The only uncomfortably absurd part of the musical was when the ensembled donned sparkly stars to dance to Aunt Festra’s beautiful serenade to the moon. It was unclear whether or not the bedazzled stars were a serious part of the song’s dance, or a comedy.

Nevertheless, the musical did an excellent job of conveying the morbidly comedic genius of Charles Addams, the creator of the original Addams family comics. The Addams family’s morbidity shone through the show’s dark sets. Perhaps the key component of the Addams family’s deadpan humor is its surprising relevancy. The Addams family comics, television show, movies, and musical demonstrate that normalcy is simply a human construct. In the original Addams Family television show, Morticia Addams says “Normal is an illusion. What is normal to the spider is chaos to the fly.” The musical shows that what is normal to one family, such as Addams’ obsession with death, can be perceived as abnormal and even horrifying by another family. One of my 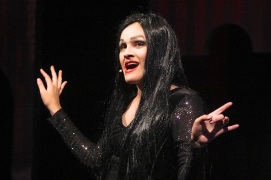 favorite moments of the musical is when Gomez, after finding out about Lucas, exclaims, “Ohio? A swing state!” The musical carried a refreshing awareness of modern culture.

The “normalcy” interpretation of the Addams family lends the musical a troubling feminist reading. Wednesday Addams, a capable young woman, is simply passing from one family’s routine life to another family’s sense of normalcy. Despite their different ways, the Addamses and Beinekes experience the metaphysical paralysis of James Joyce’s Dubliners. This is what drives Alice Beineke to sing a heartrending song about motherhood and stifling middle-class Ohio life. One cannot help but wonder if Wednesday will eventually feel strangled by her marriage.

Despite its ominous undertone readings, the musical ends on a hopeful note. Wednesday and Lucas gain their parents’ blessings, and their union emphasizes that there is much more that unifies us than divides us. Even if a family revels in unhappiness and longs to engage in a hellish crusade of dark forces, love will triumph.

Congratulations to the cast and crew of the musical, and thank you for a splendid production.

0 comments on “A Ghoulishly Good Musical”