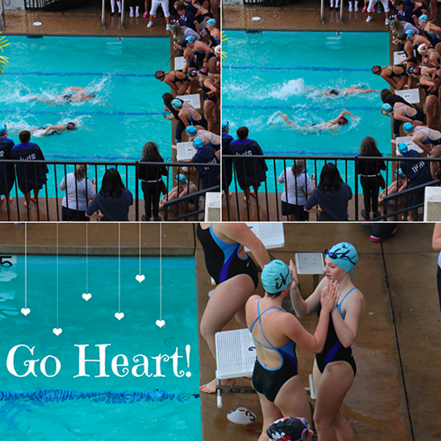 anticipation of summer. To others, however, spring means hours of practice in the sun, waking up early to attend morning practice, and sacrificing weekends for competitions. Immaculate Heart has a strong tradition of spring sports, and athletes are serious and dedicated.  The spring sports of swimming and diving, track and field, equestrian, and softball underway, and athletes excitedly look forward to their seasons.

Sydney Cahill (‘19) was a member of the Immaculate Heart Middle School swim team and is currently on the IH Varsity swim team.

Bamboo: Do you have any general comments about conditioning and the swim season?

Sydney Cahill: Swim has been such a great opportunity and I am so glad I decided to try out. Melissa is a fantastic coach and the team is really awesome this year. The conditioning started in early November and was five days a week. It was hard at first, but was probably the reason that I was able to make the Varsity team.

B: Please briefly describe the swim tryout process. Was it very selective? Were the tryouts grueling or more like workouts?

SC: Everyone made the team this year due to the amount of people who tried out; we were really trying to figure out who was on Varsity and who was on Junior Varsity. We had a good group of people trying out, and tryouts were pretty tough. One day was based more on time trials, and the other involved a hard cardio workout. Both days were hard, but totally different in terms of what was being looked at.

B:What were your favorite parts of conditioning?

SC:My favorite parts of conditioning were getting to know and become friends with swimmers from other grades and getting back into the routine of swimming every day instead of a few times a week. I saw massive improvements in my racing times just from the conditioning process.

SC: High school swimming is a lot more competitive than middle school- everyone has faster times, there are more schools to race against, and practice is definitely much harder. Also, I feel that there is an increased sense of team in the high school sports; it’s very hard not to make friends with people you’re seeing five to six days a week, and the team bond is much stronger because of the increased competition.

B: As a freshman, did joining a sport create any difficulty in adjusting to high school life? Or did it help you learn to balance your time?

SC: Being on swim was very beneficial to me as a freshman, because it taught me to manage my time and work much more efficiently. It also made social life a little easier, because on the team I was able to connect and become friends with members of the school who are in different grades or classes than I was.

B: Would you recommend sports conditioning to prospective athletes?

SC: Yes; conditioning is fantastic for getting into shape for your sport, and it also helps the team to know each other well before the season actually starts, which I feel leads to an overall stronger sense of team.

B: Would you consider being on the team next year?

SC: Yes, I love swim so far and will definitely make an effort to be on the team again next year.

Katherine Kim (‘17) is the captain of the equestrian team. She commented,

“The equestrian team is a part of the interscholastic equestrian league. Competitions where riders from various schools gather to compete 4 times a year. The team practices separately at their own barns with their trainers but everyone on the team represents IH during these four shows. Competitions are massive due to the number of students and trainers that attend. There are 4 divisions; novice, freshman, junior varsity and varsity. Within these divisions, people can compete in hunter jumpers, jumpers or dressage. Our favorite thing about being an equestrian is the bond between horse and rider. We not only get to interact with horses but with other riders and compete against each other. Many schools do not have an equestrian team, but if offered we would join and if not, we would still ride although we are not competing for the school. Conditioning is not required as a part of the team since each rider is expected to train on her own. It is required for each rider to compete 3 out of the 4 competitions. Each rider practices on their own with their trainers but personally I ride for about 6-7. Stella rides about 5-6 hours a week.”

Sienna Bruinsma (‘17) is an avid runner and has been a member of the track and field team since freshman year.

B: What is your favorite thing about track?

Sienna: I love simply running as hard and fast as I can. Even if I have been having a difficult day, when I start my warm-up jog, my insecurities float away and it feels as if I have stepped into another dimension where all that matters is my ability to give my workout my all.

B: How was conditioning?

S: Conditioning has to be one of the most invigorating parts of track for me because it is an opportunity to leave the past behind and prove yourself the coming season. It is a time of refocus and non-judgement because everyone knows that anyone can approach the season with intensity and still has the time to build up their abilities and succeed.

S: Pre-season this year was intense because certain performance standards were created to make the team. These are based on the performance of those in our league, making sure that Immaculate Heart would be well-represented by only its top track athletes. To make the Varsity team, these times need to be met and the athlete must keep at least this standard of performance to retain their spot. Those who did not make the Varsity team are in a mentoring program which gives them the opportunity to still strive to make the Varsity times and eventually be on the official track team.