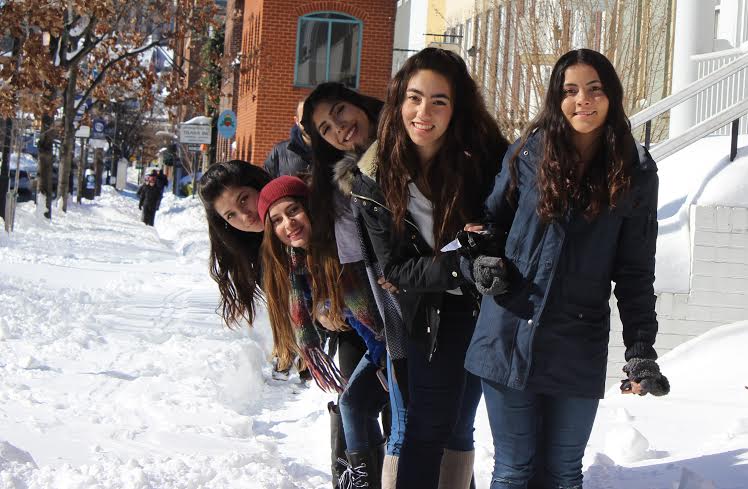 This year’s Close Up experience in Washington, D.C., varied from previous years when a blizzard hit the East Coast and stranded Immaculate Heart students for four more days in the nation’s capital. The wintry weather, however, did little to dampen their Panda Spirit as students got a close up look at government in action – and snow!

As expected, the weeklong Close Up program in January immersed 28 IH students in a full schedule. Among their activities, they visited memorials and analyzed their significance. They also watched a Supreme Court case. Once again, Close Up leaders facilitated insightful conversations on controversial issues, such as abortion, human trafficking, gun control, and LGBTQ rights. These discussions gave IH students the opportunity to interact with high school peers, and different perspectives, from Florida, Louisiana, Georgia, and Oakland, California.

“I learned a lot about people’s point of views and why they have that point of view,” said junior Isabel Zamora. “We live in Los Angeles and it’s pretty liberal, so it was very interesting to talk to other students because they all had different views.”

Getting to meet and interact with other students from other parts of the United States was a highlight for junior Eve Meldrum. “The people were amazing,” she said. “I made so many good friends.”

“My favorite part of the trip was visiting the memorials minus how cold it was – and the lack of feeling in my toes,” said junior Julia Hanna. “We visited the outdoor memorials on the two coldest days.”

As the weather turned even colder and then delivered snow, the students and their chaperones, social studies teachers Nicole Dunn and Leah Sievering, anticipated their return to sunny California at the end of their week’s stay. But with the threat of a blizzard bearing down on the East Coast, the group found its flight suddenly canceled – and they were stuck with thousands of others in the D.C. area for four more days.

Getting snowed in turned into an adventure as the students hunkered down at a new hotel in nearby Alexandria, Virginia. “During the blizzard we played cards and talked to other students,” explained junior Katherine Rodriguez. “Then we’d walk to some restaurant around the corner. We had Internet but we had to use our own computers.”

Still other students enjoyed the chance to venture outside and play in the snow. They built snowmen (and snow women) and threw snowballs. “It was fun because we were all together,” said junior Katherine Grillo. 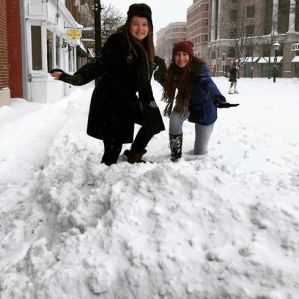 The memorable experience with East Coast weather did influence the perspective of several students on where to attend college in the near future.

Katherine Grillo, for example, said the snowy conditions did change her mind, “but not in the way you would think. I had doubts about going to the East Coast for college partly due to the weather. But after experiencing that snowstorm and the cold earlier in the week, I’m not as worried. I feel like I could handle it again. I also came back with a greater appreciation for Los Angeles.”

Similarly, Julia Hanna said she felt she could now deal with winter weather. “I originally thought that I could not handle the weather on the East Coast so I was planning on staying on the West Coast,” said she. “During the snow I realized I could probably handle the cold, but my real issue would be the summer heat and humidity.”

Still other students were more emphatic as a result of their experience.

“I always thought living where it snowed would be a lot of fun, but after being basically stuck in a hotel for days because of it, I’ve learned that although it is fun to play in the snow for an hour or two at a time it is also really annoying,” said Isabel Zamora. “We couldn’t go anywhere that wasn’t within walking distance because the public transportation was shut down, and the places that we could get to were mostly closed. I can’t imagine what it would be like to have to deal with that type of weather for more than a few days while trying to go about college life.”

While always a learning experience, the 2016 Closeup trip will clearly be remembered by these students as a unique opportunity to gain knowledge about our nation’s capital as well as how to endure a major snowstorm.

1 comment on “Stranded in the Snow: Pandas Get Close Up with D.C. – and Winter!”