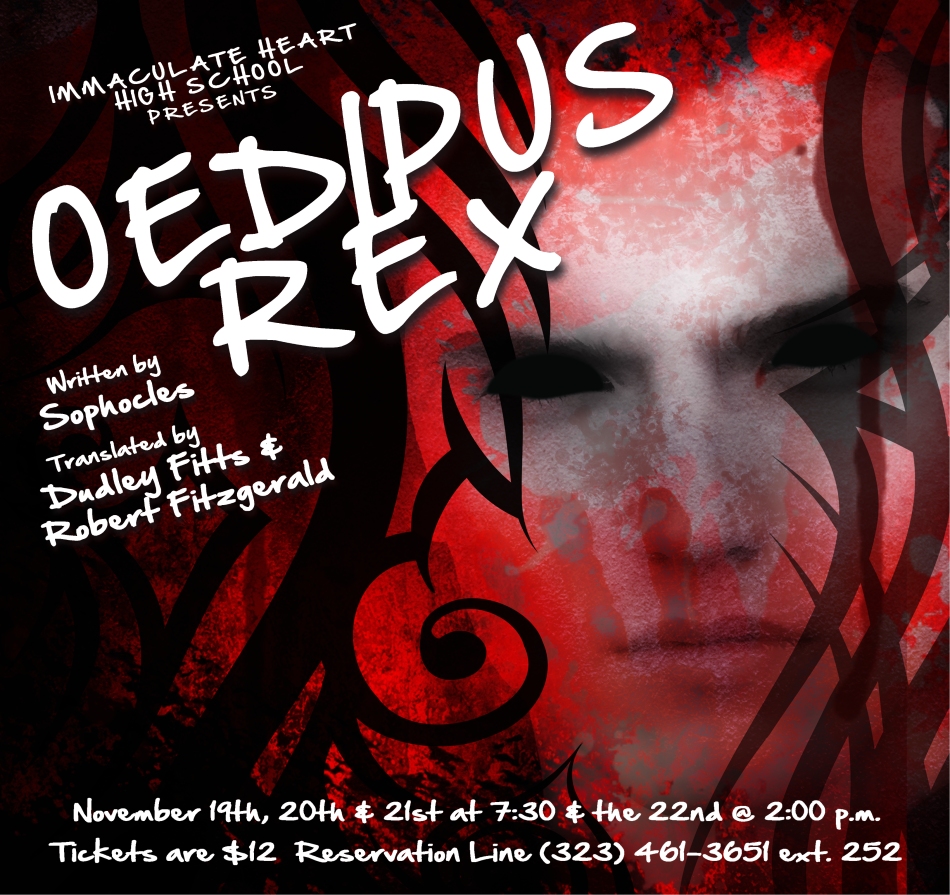 When I think of the best way to describe the making of Oedipus Rex, the word that comes to mind is not costumes, spotlights, or choreography. It’s teamwork. Each and every aspect of producing a play at Immaculate Heart requires complete dedication and a willingness to support your fellow cast or crewmember. In my week and a half of participating as a crewmember, I discovered that passion and persistence is key, especially during tech week when the company did not head home until 10:30! But there is a reason why so many students continue to return each semester to take part in the various shows produced at IH, despite the grueling hours, and that is because of the incredible sense of community and the palpable thrill of everyone involved. 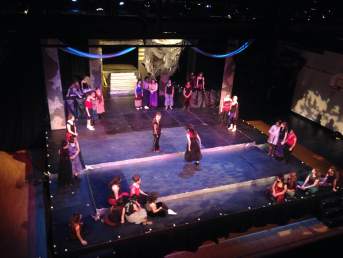 Aja-Maree Smith, a senior embarking on her third show, explains, “It’s cool that you get to see all these different sides of people and to see them open up more and become more comfortable around each other, which is something you don’t really get to do during school.”

Shea Sprague, a sophomore involved in her third show of the school year also noted that “It’s just so much fun because there’s such a great sense of community with the drama kids.” 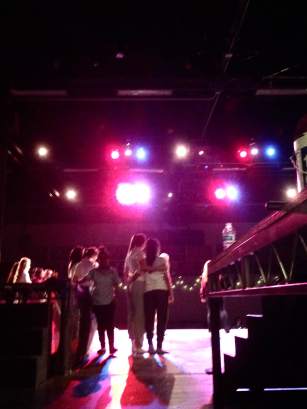 Malena Logan, a freshman in her first production, adds, “As a freshman I thought that since everyone already knew each other, I’d be on my own, but I’ve made so many new friends.”

I couldn’t have felt that kinship more as I began working with the crew. Admittedly, I was nervous my first day, and worried that the notorious bond between the cast and crew might be impenetrable. But I soon realized along with the many freshman and first time cast and crewmembers that we all belonged.

As I began to work on the set, painting columns and setting up lights, I developed a newfound appreciation for anyone working behind the scenes, including and most especially the stage managers, Danielle Cygal and Jenny Gutierrez. Simply put, their job is not easy.

Danielle affirmed that, “I think what goes into it is a lot of effort and time.”

Not only do the stage managers design the set, control lighting cues, and run errands, but also they are in charge of overlooking virtually every aspect of the production. Behind the scenes, the stage managers and crewmembers work diligently to create the perfect set and bring the play to life. Though they are assigned to perform some unglamorous tasks like setting up curtains, cutting set pieces out of styrofoam, and running to Starbucks, they are responsible for a huge part of the show’s success. 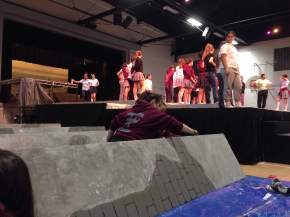 Danielle, a stage manager, emphasized that, “Even though it can be really stressful at times, it’s so worth it when you see the end product because it’s really cool to watch everyone’s reaction and you wouldn’t trade it for anything.”

As the week progressed, I watched the show and the performers evolve remarkably. With each day, the cast grew more cohesive and became more excited not only to perform their own roles but also to play off of each other and collaborate as one united body. Erin Fitzgerald, who plays the lead role of Oedipus, worked tirelessly along with every member of the cast to not only memorize their lines and choreography, but to also perform them with emotion and sincerity in an effort to create the most lively performance possible.

There are many more layers to an Immaculate Heart production than meets the eye. A cast and crew of nearly 60 students work fervently and unwaveringly with the aim of producing shows of tremendous quality and talent. Producing a show is no easy feat, but with the love and support from the cast and crew and the unbreakable passion of everyone involved, all that work is easily worth it.

Don’t forget to support the Genesians and see Oedipus Rex this Thursday through Sunday!

0 comments on “Teamwork In The Making of Oedipus Rex”