Ever since its creation in 1997, Netflix has been a leader in its field, providing consumers with readily available media. CEO Reed Hastings founded the company with his main goal of “building a new kind of entertainment company.” Since then, the company has expanded, gaining its current number of over 50 million subscribers, supplanting Blockbuster and making its way into daily American life.

Correspondingly, Netflix has gained popularity at Immaculate Heart. In classrooms, teachers use this service to easily and efficiently stream educational videos that aid the course material. At home, students often watch informative movies that are included in Netflix’s documentary section.

Aside from the website’s utility as an educational tool, Netflix provides a way for many students to relax and spend time watching TV shows and movies for fun, a concept that is sometimes forgotten amidst the academic intensity.

But when does Netflix addiction go too far? 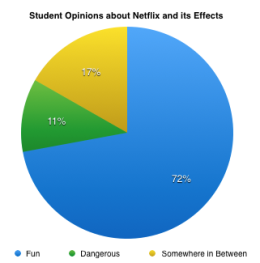 Although it can be used for good, the website has the capability to be a distraction from our school schedule. To some students, Netflix is almost an omnipresent being that incessantly croons, “One more episode! Watch me!” Unlike traditional television where commercials break up the viewing experience, with Netflix, one can curl up on her bed and sit, watching episode upon episode. The “next” button acts as a refuge, a way to prolong the terror of entering back into the real world.

In many ways, Netflix addiction is a real problem that many of us here at IH face. I interviewed our very own IH students to find out how they feel about Netflix. Here are some of their responses:

Senior Ana Gabrielian: “I think that Netflix is dangerous and fun at the same time. Honestly, after finals, and when summer break comes along, it feels good to just watch TV and let my brain do no work at all. After being so stressed for at least a month after all of the chaos with AP testing and finals, it’s nice to just unwind with a week of Netflix and finish a really good series. But also, after that week or so of doing nothing, I feel really unproductive, so I start working out and maybe do some reading instead.”

Junior Kelly Kaufman: “I think that Netflix can be a fun source of entertainment and a good break from studying. But too often, I see students watching Netflix with subtitles in class. Now obviously some classes are more boring and/or easier than others. But our parents pay thousands of dollars to send us to this school. Therefore, I think it is incredulously disrespectful to our teachers, parents, and even classmates, who are trying to focus, to watch Netflix during class. ”

Sophomore Ysabel Diaz: “Before I started basketball, I would pretty much stay up until four in the morning watching weird indie movies.”

Sophomore Gina Rue: “When I do use Netflix, I love it because everything is so convenient and has nice subtitles.”

Freshman Jessica Torres: “I love Netflix – it’s very distracting but worth it.”

Though opinions about Netflix’s importance and effects are mixed, the majority of the polled students view the website more positively than negatively. Although the site does occasionally result in problems of addiction and overuse, Netflix ushers in a new form of media and entertainment for a new age, inevitably bringing along new challenges. For better or for worse, Hastings has reached his goal when he first created Netflix and has changed the way we view and use entertainment.