The entire school gathered recently to recognize the diving accomplishments of senior Olivia Rosendahl and to wish her well as she jetted off first to Russia for the FINA World Junior Diving Championships and then later to Mexico City, where she competed at the Pan American Olympic Festival. Upon her return, The Bamboo took the opportunity to interview Rosendahl, who landed in the top 10 overall among the women divers in Mexico and since qualified for the Olympic trials. She plans to continue her diving career next year at Northwestern University! 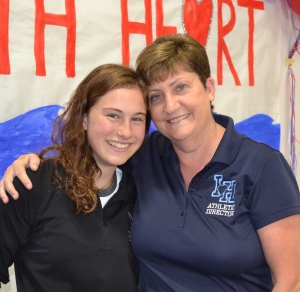 How did you get started as a diver?

When I was six years old I took swimming lessons at the Rose Bowl Aquatic Center. After my lessons, I did a flip on the diving board. A coach then came over to me and said that I should be a diver.

What is your favorite diving memory?

In 2013, I placed 12th in the preliminaries at nationals, and then I won the event. It wasn’t supposed to happen, but it did.

What has been your favorite place to compete and why?

Russia because it was so different and I liked to experience a new culture and meet new people.

How was it different competing in Russia and then Mexico City?

What do you envision for yourself in the future in regards to you diving career?

To improve, have fun, and to dive in college!

The Bamboo congratulates Olivia Rosendahl on all her success as a diver and looks forward to seeing more of her in competition in the future!